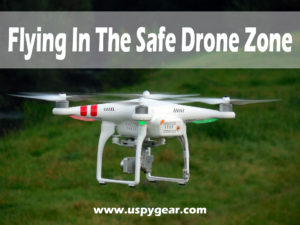 Whether you call it a drone, UAS, quadcopter, UAV or RC aircraft those little techno marvels can be a lot of fun.  However, they can also get you into a lot of trouble if you end up in a no drone zone.  It seems that every couple of months there is a news story about someone shooting down a drone.  Drones are a relatively new technology that have seen a tremendous increase in consumer and private use.  Because of their newness there is not a lot of laws governing their use.

In June of 2016 the FAA (Federal Aviation Administration) put into effect RIN 120-AJ60 Part 107 a new set of rules to define what a drone is what we can and cannot do with them.  It is not the most exciting read but if you plan on owning and operating a drone I suggest you take a deeper look.

If you plan on flying your drone for recreational purposes only, then Part 107 requires you abide by a few guidelines:

Seems simple right?  But what about flying a drone over your neighbor’s house or property?

This is where the laws currently governing drones are falling short, hence all the shooting.

Back in 1942 there was a chicken farmer outside of Greensboro, North Carolina.

This farmer sued the U.S. government claiming that the low flying military aircraft that were landing and taking off from the runway adjacent to his property were scaring his chickens and damaging his livelihood.

It took a few years but his case made it all the way to the Supreme Court.  In 1946 the United States v. Causby decision set the limits of private airspace to extend 83 feet above privately owned property.

This 71 year-old ruling to this day remains the only federal statement on how far up your property goes.  So federally speaking anyone is within their rights to fly their drone above your property.

Because of this, many states have enacted their own laws to protect their citizens from invasions of privacy.

These laws vary greatly from Oregon’s HB 4066 that makes it a misdemeanor to operate a weaponized drone to Wisconsin’s SB 338 prohibiting drones from interfering with hunting, fishing or trapping.

So, before you send your drone flying over your neighbor’s backyard, or decide to do some target practice, you might want to check your local and state laws.